The combination of a realm property where I can’t defend/provoke
Having scorned. And all my spells being sealed.
Can there be a pass option? 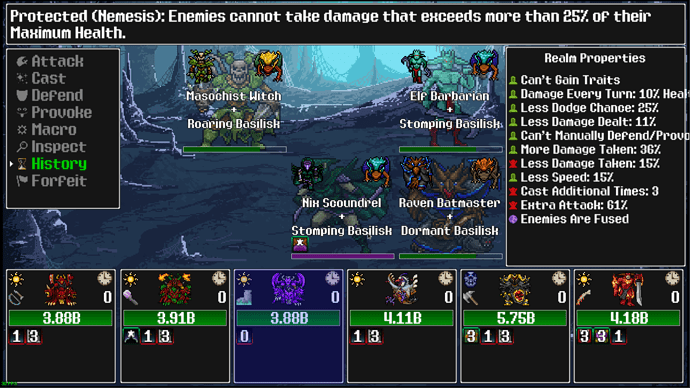 Mine wasn’t quite the same issue, but I also was going to ask about a possible “pass” option after getting “stuck” using 1 of my creatures for like 20 turns in a row, lol.

I had the ophan trait that gives a 35% chance for extra turn when casting a life spell, and unaswered prayers as an artifact spell (to boost casts quickly) and I just got stuck in an endless loop because he would also cast a bunch of spells with any action (partially because he also had defending and taunting, so end of turn always made home cast a bunch of spells from Cabalist perks, lol).

He also ended up losing his stats so he couldn’t do any damage either, lol. I eventually just forfeited (my first time, lol) and reset my Cabalist perks so I could choose not to use those auto casts. XP

Wanted to bump this as I just had the same issue and we are now on a later version that the original post.