I was playing a Wild Arena run with the effect that causes each creature to be fused with a random creature at the start of battle. During one of the rounds, one of my creatures got a trait called “Relic” with the description “You shouldn’t see this. If you do, please tell Zack.” Something about this trait gave me a hunch that I shouldn’t be seeing it, so I thought I’d tell you about it. 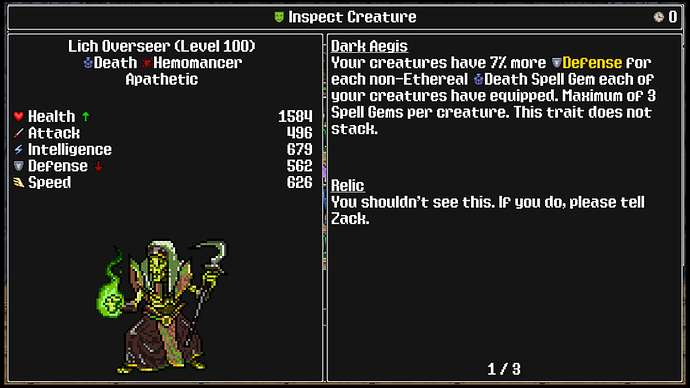 Thanks! Fixed for the next patch.

Wow, I would have had no idea what to do if I saw that. I probably would have tried asking on Discord or something, glad you had a better idea! ;D

But that is hilarious, now I’m really curious what Zack is working on…

It’s not as exciting as it seems, unfortunately. That’s a dummy trait I created that determines if a “creature” is actually a relic or not. It’s just a behind-the-scenes trigger.