So, here’s the trait by itself. 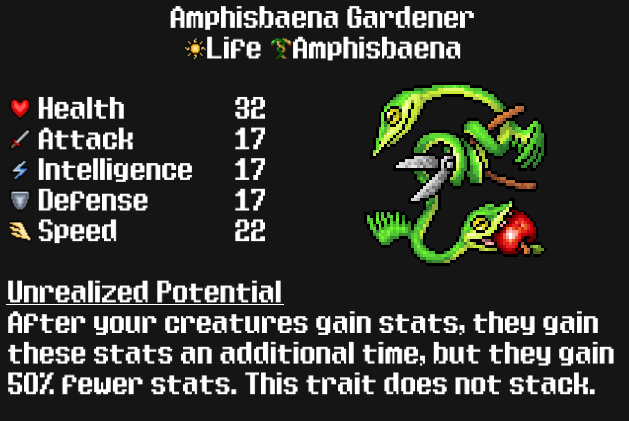 Up front, as written, this is how it reads (and I’ve brought this up on the discord before, I believe this is the consensus as to how the wording is being interpretted): When you would gain stats, you instead gain half that amount, twice.

Here’s how I wondered how it might work: When you would gain stats, the triggering effect happens twice, but at half strength. The distinction is relevant because this would cause percentage based gains to be multiplicatively larger than otherwise (while static gains would still remain the same).

However, neither of these seem to be the case. Here’s what happened when I tested it using Petra & Aes at rank 33, in a 0 instability realm (so no realm modifiers were active) 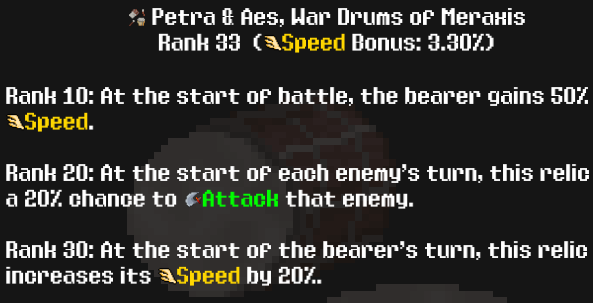 As you can see, whatever equation is happening here is NEITHER of the first two interpretations. In fact, it seems (at first) that you get a normal stat gain, and THEN, you get an additional stat gain for 50% of the original value. Basically, if this is intended functionality, the trait description should read: “After your creatures gain stats, they gain 50% of these stats again.”

However, upon looking at the math, even if that’s what it’s SUPPOSED to be… it’s not quite doing that either. Revisiting the numbers in the screenshots:

Except, hold the phone, how is the math working out then?

So, even more confused, I took out the amphisbaena and did the same test. Result?

image763×36 7.83 KB
A stat gain of 15352, for a 21.4% total gain. The extra 1.4% I assume is accountable for the random other stuff mentioned above, but the difference is jarring. Even with both scenarios having (presumably) the same other factors such as artifacts, cards, whatever, not only did Unrealized Potential not result in the same total stat gain as assumed, it actually resulted in less.

I have absolutely no idea why this would be, my hunch is something along the lines of it ACTUALLY behaving like “you gain a stat, but it’s reduced by 50% because all stat gain is halved… then you gain that stat you just got after reduction again, BUT it’s reduced by 50% also”. This would cause a 20% base gain to actually work like (20%*0.5)+((20%*0.5)*0.5), so, 10%+5%=15%. But that’s not entirely quite right either because the gain with the trait active was 17.5%, not 15%. I suppose it’s possible that the same factors that caused the untraited gain to be 1.4% higher than the expected 20%, but it seems very unlikely to me that these factors would cause a smaller total gain (of 15%) to get a bigger boost (2.5%) than the larger divergence of 1.4% from baseline functionality.

So, basically, I have no idea how this trait is supposed to work, but more than that, it doesn’t seem to work any of the ways that could reasonably be interpreted from the wording, either. In any case, either the trait isnt working as intended to be fixed or the wording needs to be adjusted to more clearly say how it works. Or maybe both. Even if the trait is supposed to work per its most straightforward interpretation (i.e. you gain the same total stats but get two stat-gain triggers), there is maybe only one or two effects in the game as far as I’m aware that care about the trigger itself, rather than the size of the stat gain (for example, ‘your creatures gain a buff when they gain stats’ versus ‘deal damage equal to the stat gained’), which is extremely limited, unless you’re planning to add more and they’re just not in yet.

I hope this helps in some way my head hurts now

Is it possible that a bunch of modifiers are applying to the creature’s total speed, and the Unrealized Potential boost is calculating before those modifiers?

What is inarguable here is that 4187x2 = 8374. This seems to imply that the initial stat gain is not being cut in half. That may not be a bug for the reasons you described.

What’s left to understand is, “4187 is clearly 10% of SOMETHING, but what is it 10% of?” And what I am arguing is that it is your stats before some key component is added. I suspect it is the artifact.

Is that how stat boosts are supposed to work? Hard to say. I imagine that for disarm to work, the artifact is supposed to basically be a buff that can be shut off, and so it makes sense for stat boosts to read from and write to your pre-artifact values (which means the pre-Petra and Aes value may not be 71k, it could be a fair bit lower because the 14k has artifact bonuses applied to it after it gets added). But it could be that it doesn’t work like that at all.

The discrepancy seems to equal about a 75% bonus which seems kinda low for n artifact.

this is still bugging me so i decided to test it with as many possible variables eliminated as possible. animatus spec with no animatus (none of the perks do anything without it), all cards turned off, only two creatures in party, one Terror Hound with fused Pleasant Disease trait (neither traits should affect the outcome at all) with Petra & Aes at rank 33 and one Amphisbaena Gardener with no relic, neither with any artifacts, realm instablity 0.

Here’s the base stats outside of battle 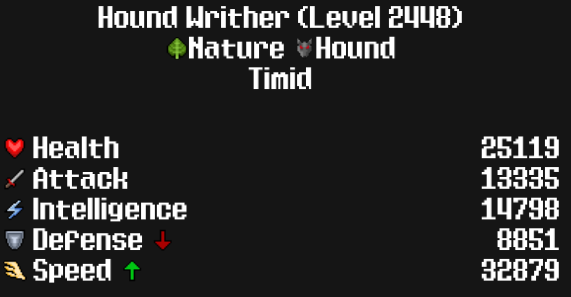 Baseline Math:
Outside of battle speed - 17637
Speed after Petra & Aes Rank 10 and Rank 30 activate under Unrealized Potential - 32879
(note that the rank 10 effect shouldn’t be affected by the trait)
Total speed gain from Rank 30 effect with trait - 5016
Speed before Rank 30 activation - 27863
Speed gain with Unrealized Potential as a percent of input speed - 18%
Speed gain just from Petra & Aes before the bonus stat trigger from trait - 12%

Now, tested without the Amphisbaena
Stats in battle, after Petra & Aes activation

So, final comparison: Petra & Aes buff WITH Unrealized Potential versus WITHOUT:
16.36% increased compared to the expected 20% without the trait.

I’m still not sure how the number of 16.36% is reached exactly but I can say for certain that the discrepancy is not solely because of outside variables and has to do with the calculation of the trait itself.

Chatted it out in the discord, and it seems like the initial Petra & Aes hit is cutting the base in half, but leaving the relic bonus unmodified. Then the unrealized potential hit is half of Petra & Aes.

It seems like it should definitely be doing one or the other but not both.