Been noticing that the max HP on one of my builds seems to be increasing way past the intended buff amount when on a suicide bomb team. First photo is at the start of the battle, after all start of battle effects have raised max HP, and the second is at the end of combat. Would try and stop to inspect, but I didn’t get a turn due to the nature of the team. I’ve replicated this with both a prugatorian and astrologer build, but the purgatorian seems to increase the gain more rapidly, probably due to the perk that keeps stat changes through death. There is no way that 9k is about 1/5 of her health without something buffing it strongly. Other times, when I have run the astrologer build, I’ve seen it at about the halfway mark for more than what the Max HP started at, so it’s definitely repeatable and has been seen at different health states. A history view in that case showed Resiliance Aura revived her for what used to be her Max HP value, meaning it’s now 50%. 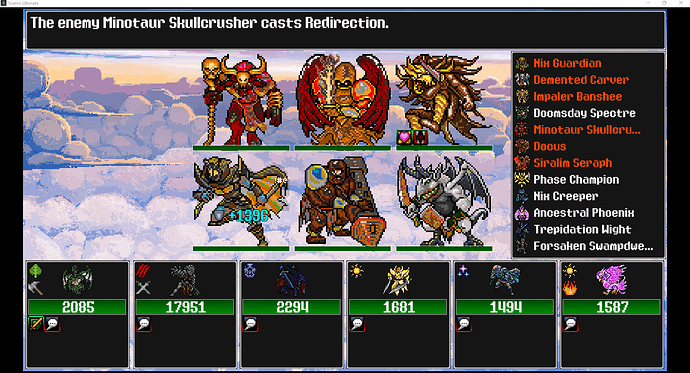 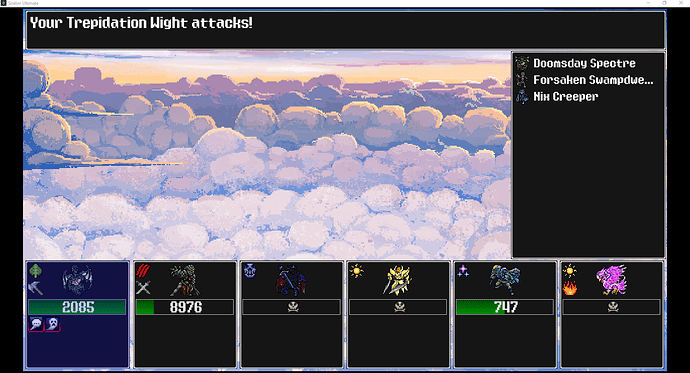 Team comp is this.

Innate Trait: Blessing From Below
After this creature gains stats other than Maximum Health, enemies lose 50% of that amount of the same stat. This trait does not stack.
Fused Trait: Monster Crown
At the start of this creature’s turn, it kills your other creatures and gains 20% of their stats (other than Health).

Trait Slot: Beast Within: After your creatures gain a stat other than Attack, they gain 50% of that stat as Attack as well. This trait does not stack.

Innate Trait: Darkness Surrounding
This creature starts battles with 125% more Health, but takes damage equal to 15% of its Maximum Health at the start of its turn.
Fused Trait: Meat Bomb
After this creature is killed, it deals damage to all enemies equal to 100% of its missing Health.

Innate Trait: Last Stand
After this creature dies, it Attacks random enemies 5 times.
Fused Trait: Heartseeker
This creature Attacks 1 additional time. The amount of damage each of this creature’s extra attacks deal after the first is increased by 35% of the damage the first attack dealt.

Trait Slot: Reinvigoration: After this creature Attacks, it resurrects a random ally with 50% Health.

Innate Trait: Resilience Aura
After an enemy dies, your creatures are resurrected with 50% Health.
Fused Trait: Dark Dance
All effects that activate when a creature dies will activate 1 additional time. This trait does not stack.

Innate Trait: Break Down And Cry
Before this creature dies, it Casts 3 of its spells.
Fused Trait: Drained
After an enemy loses stats, this creature deals damage to that enemy equal to 50% of the amount of stats lost.

Trait Slot: Wrong Side: After your creatures are afflicted with a debuff, they have a 40% chance to remove the debuff and give it to a random enemy. This trait does not stack.

Innate Trait: Lifebinder
After your creatures kill an ally, your creatures are resurrected with 50% Health.
Fused Trait: Diamond Attunement
All Spell Gems can never be sealed.

Trait Slot: Soul Sucker: After your creatures Cast a damaging spell, they recover Health equal to 30% of the damage dealt. This trait does not stack.