0.9.6 The Lost’s trait does not function as stated

Looks like it’s very similar to a bug that was fixed a month ago according to this thread:

Went ahead and just copy and pasted the title since it seems to be similar to what was going on before. In this case, Using The Lost with Regalis’s changed “share traits with adjacent” does not actually gain any traits from the team if it is not actually adjacent to them in the party. Also doesn’t share its traits with anyone its not adjacent with, but given how that should be simultaneous with getting Regalis’s trait, I believe that portion is working as intended to not give the others its other trait.

EDIT: Actually I’m not so sure about the simultaneous part I guess because now that I look again, when The Lost is separated from all other of the same class (Life) on my team by putting my chaos Tanukrook between it and everything else, it does still receive a trait from the team via Regalis’s trait – It’s own (because it is still physically adjacent to itself, I guess): 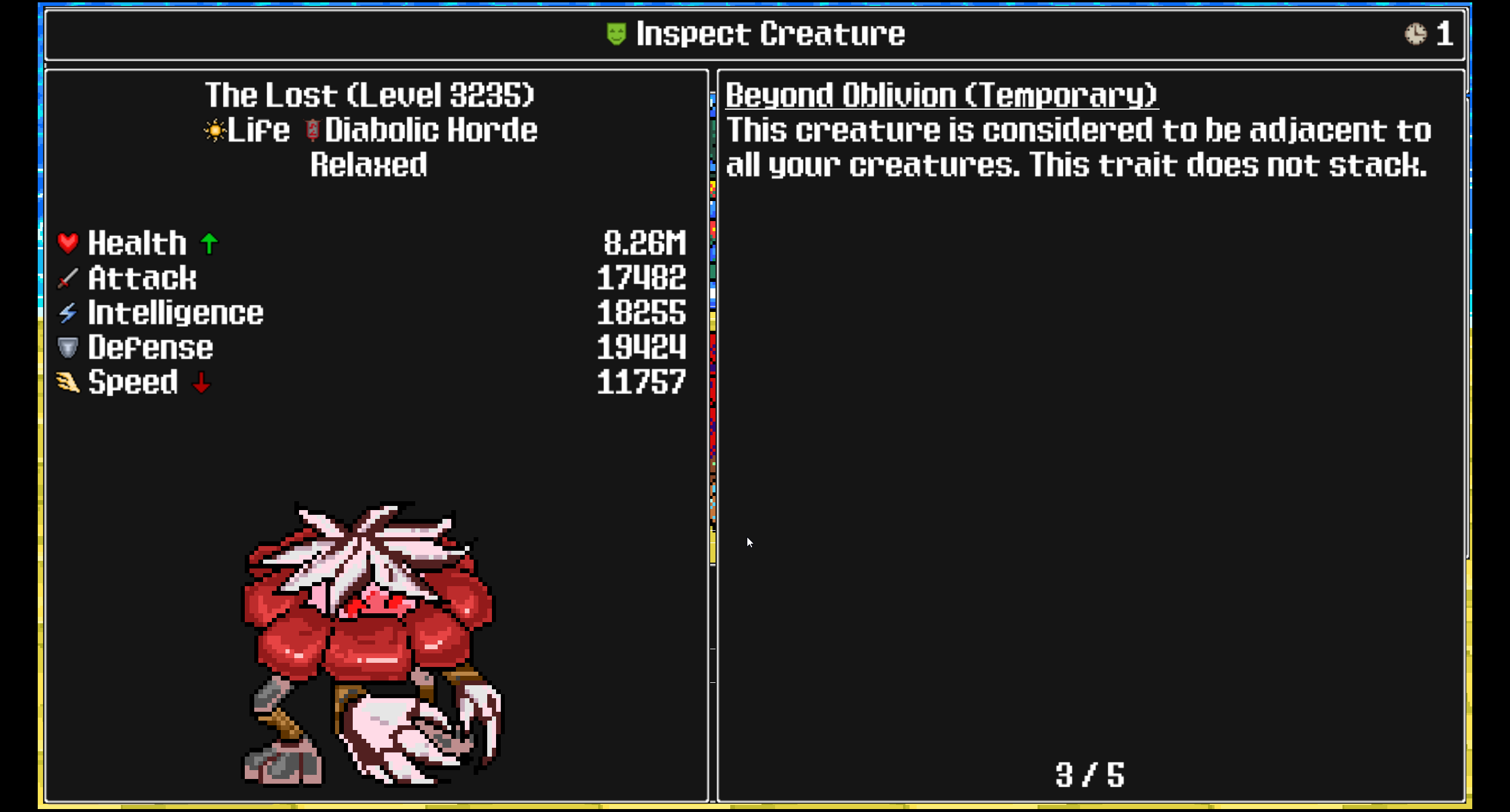 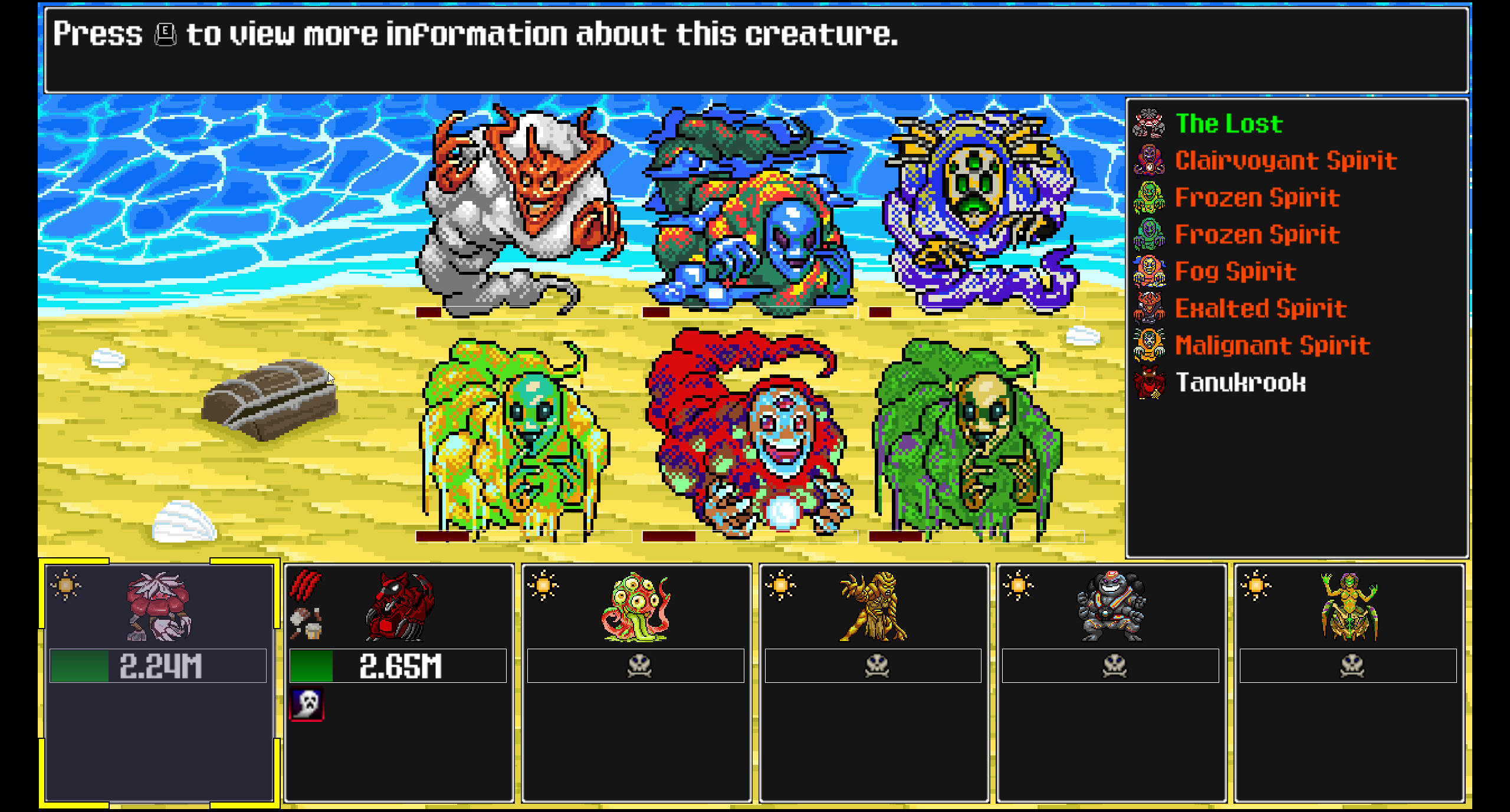 Innate Trait: Beyond Oblivion
This creature is considered to be adjacent to all your creatures. This trait does not stack.
Fused Trait: Incandescence
At the start of battle, this creature gains Maximum Health equal to 100% of its Defense.

Innate Trait: Monster Crown
At the start of this creature’s turn, it kills your other creatures and gains 20% of their stats (other than Health).
Fused Trait: Surprise!
This creature always starts battle at the top of the Timeline.

Trait Slot: Myrtle’s Greed: After an ally is killed, this creature gains 50% of its stats.

Trait Slot: Pandemonium Rebirth: After this creature dies, your other creatures are resurrected with 100% Health. If they’re not dead, they recover 50% Health. This effect does not activate if more than one of your creatures has this trait.

Innate Trait: Darkness Surrounding
This creature starts battles with 125% more Health, but takes damage equal to 15% of its Maximum Health at the start of its turn.
Fused Trait: Dark Dance
All effects that activate when a creature dies will activate 1 additional time. This trait does not stack.

Trait Slot: Diabolic Revolution: Your creatures’ Diabolic Horde traits act as if your party contains 3 more Diabolic Horde. This trait does not stack.

Innate Trait: Meat Bomb
After this creature is killed, it deals damage to all enemies equal to 100% of its missing Health.
Fused Trait: Solace
At the start of battle, your creatures gain 10% Health for each non-Ethereal Life Spell Gem each of your creatures have equipped. Maximum of 3 Spell Gems per creature. This trait does not stack.

I have recently started playing around with The Lost trait: Beyond Oblivion- This creature is considered to be adjacent to all your creatures. It does not seem to be working right or is not explained properly.

I fused all my monsters so they are Life so no issues with that. Using Regalis with The Lost this monster is getting everyone else trait as expected.

Fused The Lost with Valkyrie Queen trait: Sentinel- This creature and the creatures adjacent to this creature always have Taunting and Defensive.

Expected result give everyone Taunting and Defensive sense this monster is adjacent to all creatures. It literally only gives it to those to its left and right. Not expected.

The monsters to The Lost’s left and right get his trait but it does nothing. They do not receive all the other monster traits like The Lost did.

Is The Lost trait working properly or am I reading to much into it?

No but two are adjacent which means they would get everyone else trait and if it is adjacent to everyone then why didn’t the rest of the team get Taunting and Defensive?

The trait doesn’t stack, so it will only work for the first creature in your party that has the trait.

I fused The Lost with Pit Guard, expecting all my creatures to get the bonus to health\defense\speed, but only the ones to the left and right get it. Is this expected?

It would seem The Lost Trait allows him to receive all benefits from being adjacent but not give the benefits out. That is the same issue I had with the Valkyrie Queen Trait.

This is just how the trait works. It could be worded a bit better perhaps, but the functionality is that The Lost is considered ‘adjacent to all your creatures’ specifically for other creatures’ effects that say ‘creatures adjacent to this one.’ That is, it is considered adjacent for INCOMING benefits, but not OUTGOING benefits. I’m pretty sure this is intended, but the wording is admittedly not super clear about that. So, for example, if you have Regalis on your team, The Lost will receive all traits from creatures sharing them, but will NOT share its trait with all creatures (which would be redundant for regalis anyway, since it doesnt apply the sharing twice)

I assumed outgoing were also intended given Zack’s reply in the linked thread.

Currently have The Lost set up with Rampart and Righteous Concession; but it only propagates those trait effects to the closest two creatures near The Lost (instead of propagating the effects to the entire team)

ah, i’d missed that, I wonder if the functionality or the wording was wrong? seems that whatever fix Zack made didn’t solve it in any case

Haven’t tested with the newest patch but this thread was about The Lost not receiving any traits through Regalis’s if not physically adjacent to begin with (so incoming wasn’t working). In the screenshot The Lost was only getting a temp trait from itself and no one else when separated. I’ll have to check on newest version.