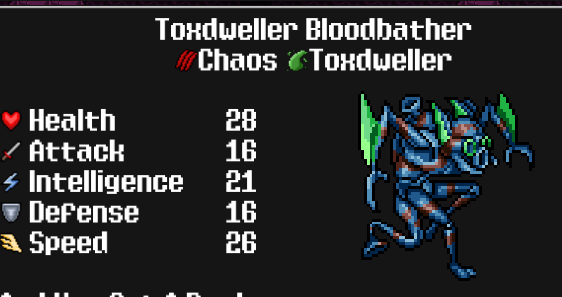 Incidentally, the Bloodbather sprite doesn’t appear to have a stinger (unless the flat disk tail thing is supposed to be that). However! The Toxdweller Mutant sprite does.

But hold on, the Mutant sprite doesnt have 3 eyes for 4 arms! However! The Toxdweller Slasher does

Theres a few examples of this, but i won’t paste them all here because it’s easier to simply look at them in game for reference. That being said, here’s the mismatches that I’ll note, with possible corrections?

It’s a bit complicated by the fact that two lore entries mention stingers, but only one sprite clearly has something that could be unambiguously called a stinger, but in any case, neither of the ones that have the stinger mentioned in their lore have that sprite, so I’m pretty sure there’s some mismatching going on.

For that matter, I have a hunch that this isn’t unique to the Toxdwellers but may also be the case with other races (simple case of misassigned sprites during dev I’m guessing) based on a few lore texts here and there, but Toxdwellers are the only one where it’s obvious enough that I feel it’s worth pointing out. That being said, at some point a review of creature sprites to make sure they’re assigned correctly might be worthwhile if it’s something you care about (though admittedly it doesn’t really impact anything, just something funny I noticed)