I reported this bug on the Steam forums as well.

Sometimes, and I can’t seem to pinpoint why it happens yet, the first creature in the timeline, on the first turn, will repeat its turn over and over and over again but the timeline doesn’t move. I know its repeating its turns because the battle fatigue message will come up eventually and will increase over time. This causes the player to Alt-F4 out of the infinite loop or to wait and see if the team they’ve created has something to deal with this bug.

What I can say is that it only happens if an enemy creature is on the top of the timeline at the start of battle.

Did some searching on the Steam forums, found that if I searched for ‘Bard Trovatore’, other reports come in for the exact same issue and that there’s a Bard Trovatore trait in the battle somewhere, whether it’s on an enemy creature or fused into a player’s creature. It’s been happening through multiple versions of the game as well.

I am now getting this, after some update hit LATE tonight. This comes up when combat is trying to start.
Restarted steam, verified local files, same issue. 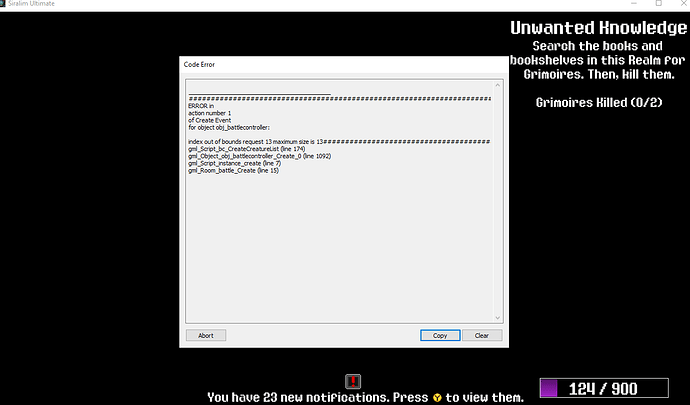 Yes, another update. Removed the Hymn of Panic trait from my team (Bard Trovatore trait), I can now enter combat again.

I just released a hotfix that should solve the crash and the Bard Trovatore issue - just restart Steam to make sure you have it. Thanks for the information!