I don’t have a lot of relics to test with, but after something was pointed out on the discord, I’ve been doing some minor testing with the 2 relics i currently have that i am able to test with; Mutatias & 5740-NG (Strong), both at rank 20.

As far as I can tell, neither weapon does any amount of damage when they attack on their own., even if targeting a Lv1 Fae and their abysmal defensive statline. This can cause Strong to not actually give any amount of defense to the creature holding it. However, the relic attacks will do damage if there is a teamwide effect that adds or converts attack damage based on a different stat (Bards, Stardust Amaranth, relevant Windrunner/Bloodmage/Siegemaster perks).

Help from others testing seems to suggest that this isn’t merely a straight attack stat of 0, because Double Punch cast through a Thousand Needles can still do damage at all.

Since a new patch tweaked things just now regarding relics, i re-tested the situation. It seems whatever underlying problem causing attacks to do 0 damage baseline has not been fixed with this patch, and the results are the same as they were before 1.0.2. 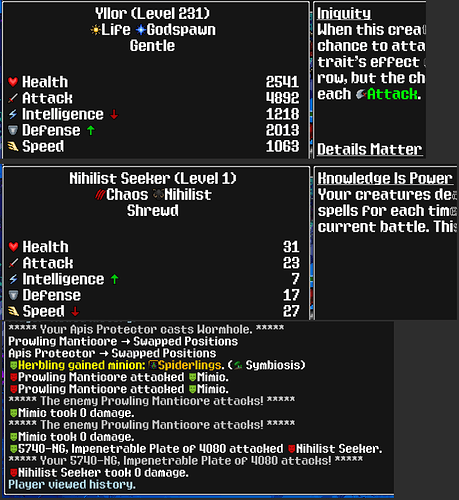 Post-hotfix edit: Whatever happened in the hotfix seems to have worked, and relics are starting to do actual damage now! Cheers!