So I’ve been seeing lots of strange bugs and stuff, but I haven’t been to great at reporting them lately, let’s see how many I can remember, haha.

And I think there was probably something else, but I can’t remember, oops. I think these were the main things, at least.

I remembered something else I saw today that really confused me, the Master of Beacons Trait. 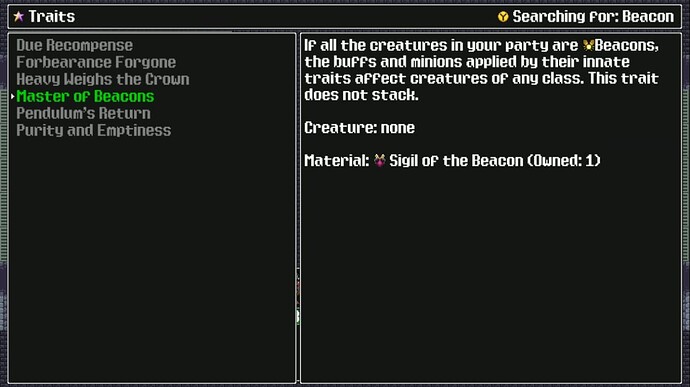 Beacon Traits’ buffs/minions already affect other Beacons, so if all your creatures are beacons, they’d already share their effects, wouldn’t they?

I was thinking maybe it meant the other effects would ignore classes, but it doesn’t sound like it (i.e. if any enemy tried to afflict you with a debuff, it’d apply a buff instead, not only enemy Death creatures?).

I might just be missing something here, but it doesn’t sound like this perk does anything as it currently is.

Oh and I just remembered one more, the Master of Golems Trait still says it grants your Golems “Double Take” when that doesn’t exist anymore, being replaced with “Triple Take”. It still functions correctly, though.

Another thing I just saw, and sorry, I can’t remember exactly what rank it is, but Vertraag at one rank says he gives a “100% bonus for collecting all 3 orbs”, but if I remember correctly it gave 250 favor before and 375 after.

So I’ve been running into what appears to be several bugs with Reaver and I’m thinking mostly Anneltha.

And… I think there was something else, but I always forget by the time I pause the game and get here, haha.

It might have just been that Weird Dance doesn’t say it doesn’t stack.

Didn’t notice this until I turned my stat gain text back on, but the Formation Trait doesn’t grant defense to all your Uralos creatures, only the one(s) that is/are damaged. All the other traits give stats to all (which is what sounds like should happen).