If you want to breed a monster with relatively high gene strength in all categories, you need to splice them.

Both parents need to have around equal gene strength, but should not have overlapping contributing Gene Stats.

Splicing redistributes the stat growth of the monster, it does not increase much the resultant +gene strength you see on a monster, if anything that number is deceptive.

When the breeding partner has zero gene strength, it only contributes to the +GENE amount of the child, level of the monster influences it somewhat, but it is also influenced by current Gene strength of the 1st monster and capped by 200% of the Mage’s level. Eventually if gene strength is high enough it reaches a point where the partner’s gene level doesn’t matter, but in the start when gene strength is only in double digits, it helps quite a bit.

The tricky part is finding out the right creatures to breed for specific stat growths and how not to mess them up when you splice them.

Generally you will always want HP on your monsters.

A thoroughbred Masochist witch will give

Basically it’s only good for spell casting, as it has no speed. You need speed if you want to use physical attacks.

What is neccessary is a creature which gives Defense and Speed only.

I haven’t found one, but I’m thinking it will be one of the Amaranths.

But from what I have done is spliced some +1000 thorough breds.

I breed a Masochist witch with Raven Acolyte

I feel I’m heading in the right direction of how breeding works, but I haven’t quite got it yet

From my personal tests I can add the following for breeding with creatures without gene strength.

I can say that number 1 there is wrong. YOu can get way more genestrength than 3 from a non-gene strength creature, as long as its level is high enough. It all depends on the pedigree parents genestrength, and it doesnt always add genestrength to 3 stats either, i’ve gotten only on 2 on occation.

I breed my familiars with varve imlings, the imlings never having any genestrength, but making sure that both the familiar and imling has reached my level. At least one of my familiars got only gene in int and speed (which is the strength of the imling), and all 6 familiars got +8 from basic imlings last breeding (from +25 to +33).

You don’t know the contribution, however the pedigrees gene-strength dictates maximum offspring gene-strength.

No it does not. You can flip pedigree and mate and get exactly the same distribution and gene strength, just make a backup and test it. Here is what I used:
Parent 1: Level 1 Colossoal Giant with +77 gene strength
Parent 2: Level 63 Emerald Paragorn without gene strength

Just to clarify on the max gene strength being +3 per parent. This is false but in reality true. There used to be a hard cap on it and it was +3, Zack took the cap away in one of the patches. You can now get more than +3 for having a creature level far above your mage level. It just isn’t worth your time or effort. The most I’ve gotten is +5 but that was from creatures somewhere between 50% and 100% above my mage level. I would not recommend raising your creatures that high of level as it is a giant waste of time though.

You can see its detailed stat distribution in the attachment. I was able to breed it using the theories I mentioned in the second post of this thread. 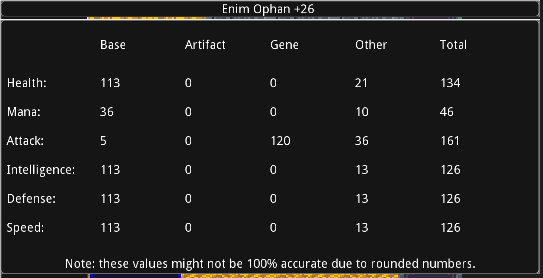 You guys should try and breed a creature to at least +1000 gene strength first, it will make my first post make more sense.

You will realize that level of the parents contributing to gene strength becomes irrelevant.

Then go full on HAM on breeding these without caring about balanced stats, give your nether creature/demon the Defense aura, and one of your creatures the Pumpkin Spice trait, this rectifies not having to invest in any HP gene strength.

Your observation seems pretty straightforward to me: “Breeding with creatures that are strong in specific stats will add some of those stats to the offspring”. However it does not tell anything about how much of those stats are added. You could provide the normalized gene strength stats of the parents and offspring so we can argue about how a creature’s gene strength and level affects the offspring.

To normalize gene strength do the following:

The gene strength points might not always be an integer but should be very close like 0.99 or 1.01