Bug-Gameplay-Valkyrie traits not working (or Not described correctly)

Now the set-up should be pretty easy to figure out, APIS DEFENDER soaks up all attacks, triggers scouts to wail on attacking enemy APIS DEFENDER either revives due to Vivifier trait…or heals due to Blood Sucker however this is not working. Even when APIS DEFENDER intercepts a enemy attack labeled attack my scouts were not triggering(Edit: after leveling up to lvl 2 the abilities started working, alternatively could have been a trait combination amongst the enemies traits)

3RD layer Strategy, using my Soul Reaper I kill my Valkyrie Lance so that all my creatures have Her Traits (though I think after using the creature it only takes the innate trait)

4th Layer Strategy, Using my Soulflayer + Snow Cockatrice all my creatures should be considered valkyries, causing each one to have a 30% chance of attacking when another one “attacks” HOWEVER, I think I misread because Snow Cockatrice uses keyword class and Soulflayer uses keyword dominant race So this layer should be me misunderstanding. However even at only a 15% trigger rate, its not triggering as often as it should (mathematically) (Edit: Still not triggering at a 15% rate)

Unintended trait combination…when I use soul reaper to kill lancer the scouts absolutely demolish him… and then go on to beat the infinite crap out of each other… is that expected behavior, it seems legit, if not entirely optimal. Thanks Zack! 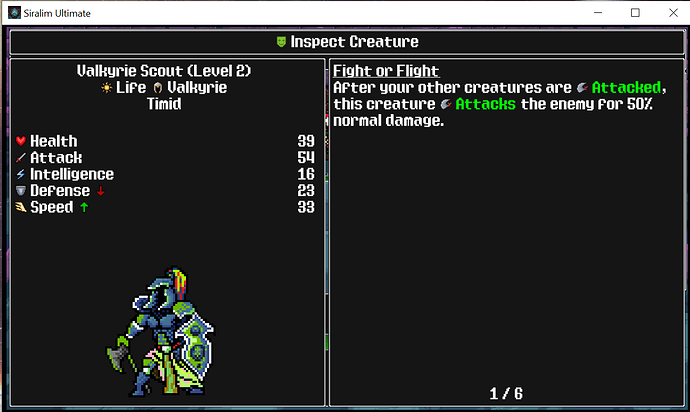