Think I broke sequence of god encounters around realm 31:

So after speaking to Torun (and actually looking at target realm depths for my quests), I think I should’ve been clearing the Cutthroat Jungle before getting to Eternity’s End. Seems like dying before initially meeting with Torun broke…something and i got spat into Vertraag’s place a bit too soon.

Should probably note that I’ve not used power to choose where I was going. For realm 30, i had the choice but left it at random. Didn’t get a choice for the other noted travels - it’s just where the altar sent me.

Thanks for the details, I’ll take a look!

Bit of an update on this -

Where we left off, at realm 32, I had two quests - The King of Nex (from Vertraag), and Imp Impington (Torun).

So now my two quests are Imp Impington, and Destination: Friden’s place.

Guessing if I go through the Jungle and get the Imp again, Regalis is going to have forgotten all about me by the time i get to her. Then i’ll get another introduction to Vertraag (his premonition that i’d be coming gets less impressive every time!). But then after King Fight round 2 both my quests should synch up. And since i’ve not said hi to Friden yet, i can do all the introductions at once and everything will be back to normal?

Going to push through the 30s again and see what happens when I get to Where The Dead Ships Dwell, probably leave another wee update then. 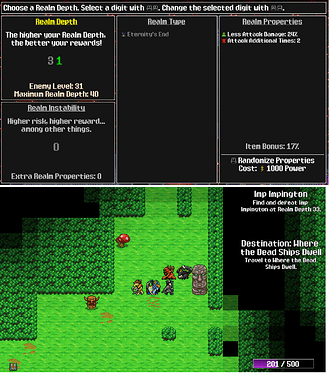 An end to the adventure -

Noticed after that, that realm depth 41 was accessible through the shrine, despite my never having been to depth 40. Went to 40 next anyway, said hi to Friden, and will be heaading off to the beach once i’ve updated to v0.1.10

As an aside, i quite enjoyed how well that bug fit with the lore… Everett did warn me that getting to Eternity’s End would be tricky. What with jumping between Eternity’s End and the Jungle almost at random, finally getting Vertraag’s help, and then finding myself stuck in a ‘time loop’ and having to go back and redo Torun’s quest… All seemed to fit quite nicely - entertaining, if unintended.