Bug with certain objects in realm 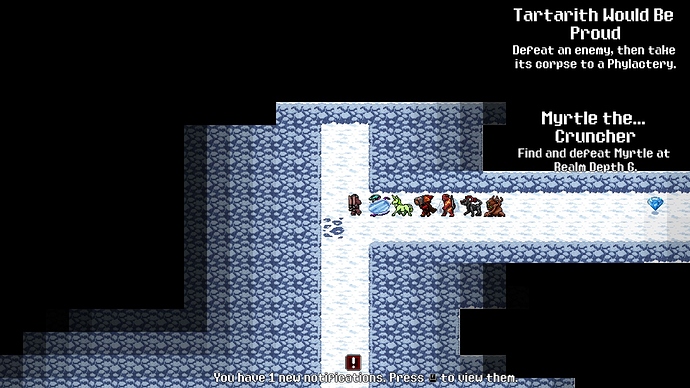 Certain objects are layered over the creatures, but not over your character. See attached image to see what I mean.

I know it’s a small bug, but it’s a bug nonetheless

I think this was fixed in 0.1.6 already. Have you updated your game to the latest version?

Hmm… I don’t think I have. Last time I checked, I had the newest version according to Steam. I will check Steam and update as soon as I am able. Thank you!

The developer tends to publish patches at a breakneck pace, so it’s pretty easy to find yourself in a situation where you are couple of patches behind.

I think there were around 3 or 4 patches published just yesterday, 0.1.9 being the latest.

Ah I see. Steam says auto updates are enabled. I will restart Siralim after this realm.

Also, a different bug might have appeared for me, but I can’t post any more messages since this is my first day:

When I unplugged my headset (it was during a battle in that cloudy realm around depth 26 I believe), Siralim stopped playing all sounds, and every time I attack or cast a spell, there is a solid two to three second delay before the game decides to continue. There are also no player attack animations any more. There are cast animations though. Also, when the enemy attacks and casts, it’s working fine. EDIT: It also affects enemies now.

Finishing a battle doesn’t seem to resolve this. But the game works fine otherwise as far as I can tell.

Perhaps this has already been patched, but just throwing it out there. I love this game and I want it to be at its very best!

I am not entirely sure it is related to me unplugging the headset, but it’s a strange coincidence if it is not.