I’ve encountered a strange bug today while doing my daily realm. I was fighting a group with one accursed worm and five diabolic horde creatures type. I’ve killed the worm and four of the diabolic. I was left with only one diabolic then. At one moment, the dead worm has begun to act even though it was dead and not visible on the field or in the action queue. It was defending and generating bomb maggots in loop. Each time I was pressing a button, the worm gained a new turn and defended again. I have waited for 20 maybe 30 turns but the loop never ended.

I have been able to exit the game and save my progress by pressing the back button on my Android device. You said this button had been disabled on 1.3.0 but it still works on my device and I have to say that’s a chance. I’m not sure anymore I want you to disable this button as it allows to “force exit” while saving the game.

Any idea if one of the Diabolics was a Diabolic Nemesis, and therefore it would have Link? Maybe there’s still a bug with Link that is causing this to happen.

Honestly I don’t remember if there was a nemesis in the group, but that is possible.

I just checked and Link appears to be working fine. Could you please tell me which abilities your creatures have?

I’ve got a Unicorn Vivifier, a Unicorn Consecrator, A Skeleton Motarman and a Skeleton Gunslinger with no additional ability. And I have a Pegasus with Afterlife legendary enchantment and a nether demon Fallen Carnage with a permanent berserker buff.

I actually ran into this problem too, I was stuck in an eternal loop because my unicorn vivifer had invisible proc’ed from an artifact. I attached a screenshot hopefully it helps.
I was also in a daily realm, the one where the dead are revived sometimes, maybe that could have something to do with it? 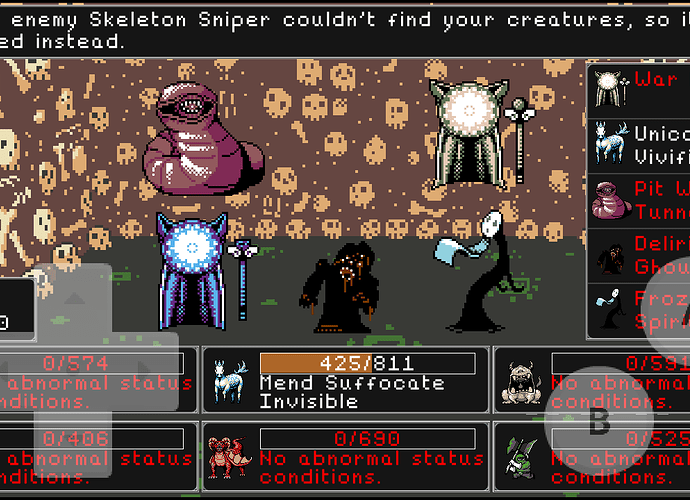 Was it stuck on that exact battle message? Pressing A didn’t let it continue at all?

No, but it was stuck on the dead skeleton snipers turn. He just kept going and took an unlimited amount of turns, would have wiped my team if it wasn’t for invisible being proc’ed.

Alright, thanks for the info!