Dumpling’s trait (Secret Ingredient) is bugged and gives significantly more health than it is meant to. The trait triggers once for each party member. Each of these triggers use the updated health from the previous trigger. This means that a full party of dumplings receives ~4605% additional health, rather than the ~90% it is supposed to.

It is very easy to test this. Grab a dumpling, and put 5 random creatures in your party. Go into combat and the dumpling will have 2.3x health rather than 1.15x.

In this picture the amaranth and dumpling have the same base health, are the same level, and have no health personalities or health scrolls. The dumpling should give itself 15% bonus health and end up at ~220.8k health, but it is at 444.24k due to the trait activating once for each party member(192.05k*1.15^6) 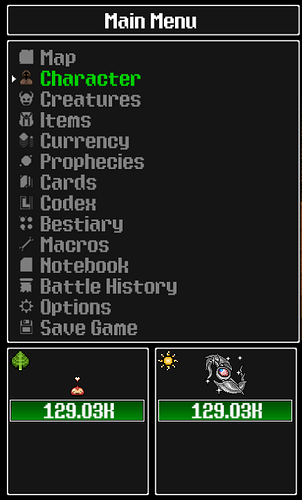 And here’s the two creatures shown with the same base health.

This effect becomes more and more obvious with each dumpling that gets added to the party. With 2 dumplings, and 2 creatures (who both have the same base health as the two dumplings individually), you can see how quickly dumpling hp scales.

And with a full party of 6 dumplings the trait would give the previously mentioned ~4605% additional health (~1.9^6) with some difference due to differing base healths of the dumplings.

This was tested on version 1.0.5 on windows.