Description:
Traits that trigger “after this creature is attacked” don’t trigger if your creature takes 0 damage. It seems to require at least 1 damage.

This is counter intuitive or some traits, like Memento Mori (after this creature is attacked, the enemy takes damage equal to 75% of this creature’s defense), since building enormous defense could push the enemy’s damage to 0.

If this is intended, it would be clearer if it read like, “after this creature takes damage from an attack”

I tested this with Memento Mori, Creation Dirge, and Entrapment and all seem to work the same way. 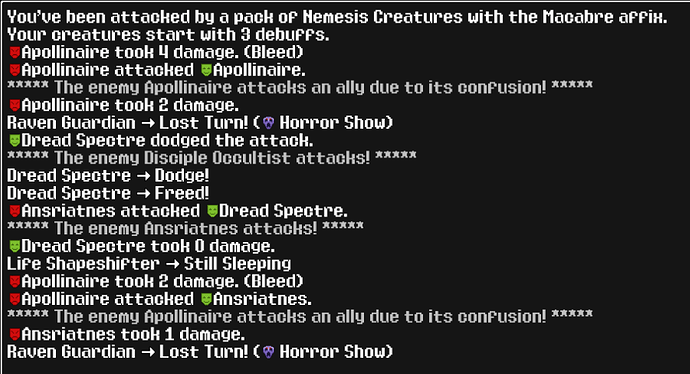 Normally, speed will cause a small amount of unmitigatable damage to the defender. I rarely see 0 damage taken, although having a barrier buff also prevents on-attack triggers if you don’t get through the barrier.

The spell sabotage says that these attacks do at least 1 damage, which indicates that taking at least 1 damage is required for on-attacks to trigger. this is intentional, if somewhat annoying. It’s particularly annoying when your creature dodges when you don’t want it to, but there’s also perks and such that prevent you creatures from doing that too.

I wasn’t aware of speed causing unmitigated damage, I must be running too many reduced damage effects to encounter it.

There are other creatures with traits that reference when they are “damaged by an attack”, I think this would be a much clearer description for these types of abilities.