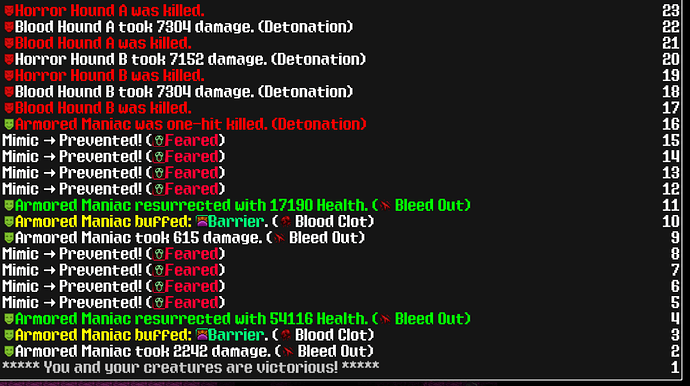 The bug that occurs is that my Armored Maniac’s max hp is 26k, it revives with 50k+ hp and should have that amount as max hp afterward.
What happens is that my new max hp becomes 27-28k for some reason.
This happened every battle in the same realm. The realm had no stat reduction or any sort of hp/stat gains/decrease change.

The bleed out perk dmg is reduced because of Endurance Aura trait, incase you wonder.

Edit: My bad, maybe it’s not bugged. Noticed (Bleed Out) isn’t affected by my Endurance Trait. Is that a bug? Since I’m suposed to “take” 50% hp dmg and that should be counted as a source other than attack/spell right?
Endurance Aura does reduce “Sacrifice” perk damage which makes my creature take damage, but it doesnt work for bleed out which also makes my creatures take damage.

2nd Edit: Maybe it is bugged, I think Bleed Out perk activates twice. First to halve my hp which ignores Endurance Aura, then damage me another 50% which my Endurance Aura does reduce to 10% dmg.
Since I go from 54k max hp, to 26k max hp and then take another hit from bleed out (keeps my new max hp) but goes down to 24k hp from 26k