Hypertrophy and other Bugs?

I have been encountering several bugs (I think) lately, though some of them I forgot because I was too lazy to write them down (sorry).

The first one I’ll mention is that Hypertrophy doesn’t seem to allow casting… I tried targeting my creatures, which I thought would work, and got an error sound. Then tried enemies, same. Tried it on all creatures in several battles, but couldn’t get it to cast at all…

Second, not sure if it’s intended, but I encountered a Mimic wearing a Carver skin, which seemed pretty weird. 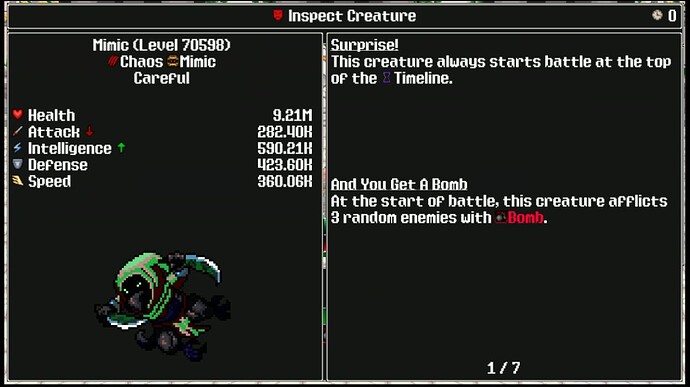 Then I thought there was something else I was going to mention, but I already forgot while writing the other two things, so I’ll bring up something that seems like a bug but might be the only way it works. I think I might have mentioned it before, but not all effects that are supposed to happen at the same time do. This is almost apparent with a team of Reclusive Wights, as ones that die later can resurrect the ones that died earlier, even if they all die from the same action. It also has a pretty big impact with Tanukrook, as the order you have them on your team ends up changing things a lot. Having a Unicorn Vivifier (or anyone) with the trait that attacks when an ally dies in the last spot will trigger for each party member before them (meaning Vivifier will likely res everyone immediately), meanwhile putting it at the front of the team will cause it to not trigger at all, because all the creatures get killed “after” it.
I imagine that it probably has to work like this or with the way it’s built, but just was wondering, and did remember this, as opposed to whatever else I was thinking 10 minutes ago, lol.

UPDATE: I remembered what else I was going to say, but I’m also not sure it’s a bug, but didn’t see it mentioned in the Combat section of the Codex (but maybe it’s elsewhere). Attacks from Sabotage (and maybe other “can’t be dodged”) can be dodged with Aeolian’s trait (and I’m not sure if there’s other cases), which I guess might mean Traits take precedence over Spells (thought maybe that was what I’d heard, but didn’t see it in Codex). Just confused me for a bit when my other Avatars randomly get Aeolian’s trait from Fatum or other effects, haha.