[center][size=12pt][b]The Star Festival is a festival held in many places in Rodia starting on the 4th of July with a big celebration where they shoot fireworks into the sky to signify the start of the festivities. Legend has it that the festival was originally to celebrate twelve great creatures before the gods were known to most of mankind.

This year, however, something new and interesting happened: Giant jewels were spotted inside of realms with the symbols of the twelve great creatures of legends.[/b][/size]

[size=18pt]Aries Apis[/size]
[size=14pt]…The Aries Apis’ coat is such a golden sheen, that many people coveted the item. …Legend says out of pity for the creature, Yseros put the creature into the sky with her illusionary powers.[/size]
Material: March Bloodstone

[size=18pt]Taurus Minotaur[/size]
[size=14pt]…The Taurus Minotaur was the greatest battler the world has ever seen, one that all Minotaurs strive to become. …After it died in a great battle, Gonfurain decided to seal it’s immortality in the stars, a decision he has secretly regretted.[/size]
Material: April Sapphire

[size=18pt]Gemini Abomination[/size]
[size=14pt]…The Gemini Abomination was said to be the only one of it’s kind to have been born with two heads. …It is rumored that Tartarith may have had a dream of this creature before he died and has tried to re-create the creature by his own means.[/size]
Material: May Agate

[size=18pt]Virgo Gorgon[/size]
[size=14pt]…Long ago, the Gorgons were very beautiful creatures. The Virgo Gorgon was the most beautiful Gorgon that had lived. A jealous Smith however cast a spell that made all gorgons look like how they do today. When the Virgo Gorgon died, Rumor has it that Erebyss had remorse for the creature and placed it in the sky to become beautiful again.[/size]
Material: August Carnelian

[size=18pt]Scorpio Smith[/size]
[size=14pt]…The Scorpio Smith as punishment for ridding the Gorgons of their beauty was a spell cast on it’s tail that made it grow an unsightly stinger on it’s tail and it’s hands turned to pincers. …[/size]
Material: October Beryl

[size=18pt]Pisces Revenant[/size]
[size=14pt]…The Pisces Revenant was a pair of the strongest magic Revenants to ever swim in the oceans. When one suddenly died, the other used powerful magic to turn it into a staff that it wielded till the day it died. When Frident found out they had died, he personally placed them among the stars to influence magic users.[/size]
Material: February Amethyst

[size=24pt]Mechanics[/size]
Rarely, in realms, there is one Giant Gemstone, depending on the time of year. Interacting with it will give you a battle with the creature that the gemstone represents. If you win, you get a shard of that gemstone. Giving 5 of the shards to Ianne, son of Ianne will give you the creature’s core and giving 1 shard to Samuel gives the creature’s legendary artifact.

This is not a finished idea, this may change. If anyone has any suggestions, feel free to ask and I will take them into consideration if not add them outright.[/center]

I don’t know how I missed this, but this is a pretty cool idea! Thanks!

Thank you! I’m planning on adding some of the lore and other things soon.

This is an absolutely fantastic idea and I love it.
Though I wonder one thing… if the Minotaur was rewarded for being the greatest warrior ever but his reward was to be turned into stars, does that mean he got the Constellation Prize?

…anyway, I liked the idea so much I thought i’d have a go at spriting one of them: 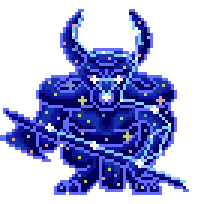 Not sure if i’ll get time to do the rest unfortunately, as much as i’d like to.

I’m glad you like it! Also lol, I guess that would be a constellation prize.

I’ll see what I can do with the sprites myself, that is defiantly a completely different take on the sprites than what I was thinking and tbh I think it might be more interesting.

If you do plan on doing more sprites, do them on the ones that have lore, as those will not be changing.

I actually thought you were doing a similar thing with the Chinese New Year creatures.

YKW, this shouldn’t be just a summer event.

You know, this is all really nice, and I’d love to see these star monsters in-game, but I have two questions.

1: Why is there no Opiuchus-aligned monster? Maybe a Basilsik or a Pit Worm or something?

2: Would a Demigod not be a better basis for a Libra-aligned monster(most of them have armor that even LOOKS like something a pair of scales could hang off of)?

[quote=“Raikomaru, post:7, topic:5165”]You know, this is all really nice, and I’d love to see these star monsters in-game, but I have two questions.

1: Why is there no Opiuchus-aligned monster? Maybe a Basilsik or a Pit Worm or something?

2: Would a Demigod not be a better basis for a Libra-aligned monster(most of them have armor that even LOOKS like something a pair of scales could hang off of)?[/quote]

There are only 12 months in a year and they are based off of the traditional zodiac.

The only reason Angel got Libra was because I thought I had ran out of female creatures so I had to use Occultist for Virgo.

Oh, so you changed up the monsters in your head? Might be an idea to edit your post to show it, man. Bring some more attention to it too!