1) What platform are you playing the game on? Windows, Mac, Linux, iOS, Android, PlayStation 4, Nintendo Switch, Xbox One?

2) What game version are you playing? Please don't say "the latest"! Your version number can be found on the title screen at the bottom left corner.

3) Please describe in as much detail as possible how to reproduce the bug/crash, or what you were doing when the issue occurred. If there was a crash, please copy and paste the full crash log, but note that we'll need more information outside of just a crash log in order to figure out what the problem is.

Life Transformation doesn’t appear to be functioning with Breath of Life.

[s]In the attached screenshot the enemy Granite Golem was being healed by it while the enemy Dread Wight wasn’t affected by it at all (the casts had no result recorded in the History). The second and fourth casts captured in the screenshot were targeting the Dread Wight.

In the next battle, one of my temporary creatures had a Healing spell gem. Casting this on the enemy Abomination Brute had no effect and nothing notated in the History. Casting a different heal on a damaged Treant resulted in a heal.[/s]

After further testing, I’ve determined that the Life Transformation trait must simply not be working. Casting a heal on damaged enemy creatures results in healing, and casting them on full-health enemy creatures has no effect whatsoever. 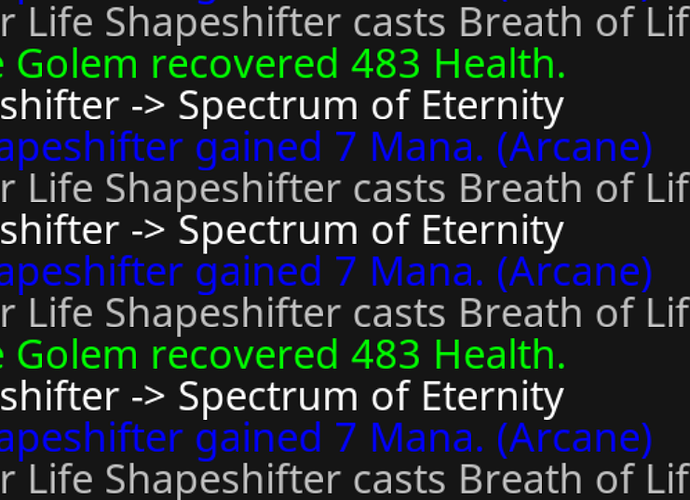 Turns out it’s just not working at all.

Wow, you’re right - I just found yet another bug with this trait. Should all be working fine after the next patch.