Mercurial Slime’s Diffusion Trait says that when it gains a minion, other creatures will as well.

Expected: a single casting of Unstable Horror should grant
the casting Slime: 1 stack of Horror
and then
it’s allies: 3 stacks.

Instead: a single casting of Unstable Horror grants
the allies first: 1 stack
the casting slime: 1

I have reproduced this for zombies and Dire wolves as well.

(below screenshoot is from a gem that casts twice, but it shouldn’t matter)

It seems like Diffusion, despite being described as an on-minion effect (that Doombringer should be multiplying), is inserting an event before the minion gain effect.

However, I think there are more bugs, because regardless of how many minions other creatures get, I find I can’t reliably predict how many the main event will trigger. What follows ia a stream of headscratching moments:

Here is a (Fusionless, Cleric) Infernal Inquisitor getting two procs:

Here is a Mercurial Slime getting four Unstable Horrors with two casts (under Doombringer, fusion): 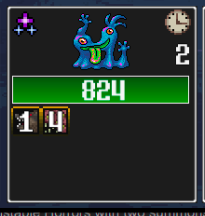 Here we get five minions when we should only have gotten three (Doombringer, no fusion):

Here we have have an Infernal Inquistor (Doombringer, Fusion) getting four base procs (should be three) (allies should be getting twelve procs apiece, but are only getting four). Note also the backwards order where allies are gaining minions before the Inquisitor, rather than after: 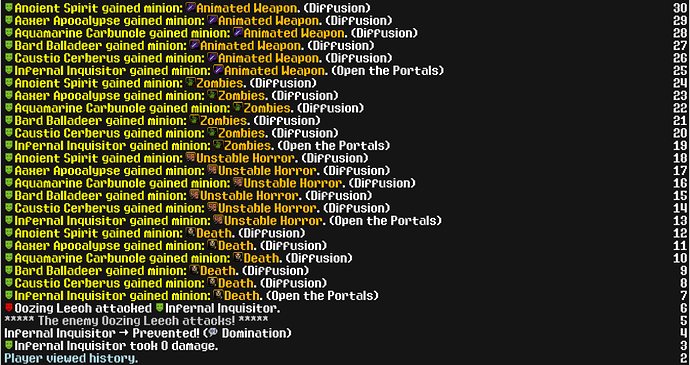 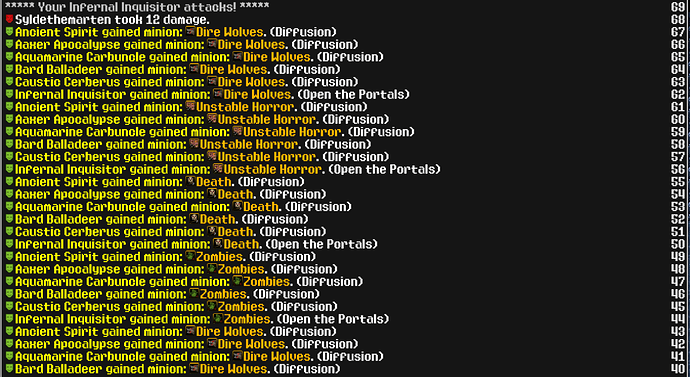