Hi, this is to report these couple of bugs for the Steam Linux Version 1.0.5:

Please look into this,
Thank you

The game only supports Ubuntu, and while it can potentially run on other distributions, there’s not much I can do about some crashes/bugs like these because it all boils down to the way GameMaker handles everything.

Yes I agree, different distributions can render windows in different ways and I will figure it out.

This cloud sync issue is the one which is bothering… this time I didn’t try to change the ID when it got reset and used it. And no crashes so far. However if i go to the import from cloud option, this is what I see (for the just exported data) - 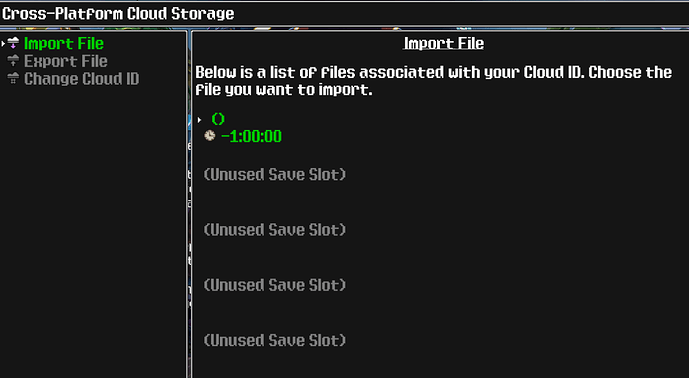 siralim cloud sync1231×675 67.8 KB
and if i try to import this to an empty slot, it gives the message imported successfully, but nothing happens.

I just got the Android version (was waiting for it!!) also and it is showing up like this only when importing and importing it does nothing. For your reference, my current cloud ID is 243249381061.

Also i exported to cloud from the android version in the second slot… but it doesn’t show up in steam in the import options.

Any help you can provide will be great. The game is fantastic!

The -1:00:00 timing means the file pretty much doesn’t contain any data, meaning nothing was uploaded. I’m guessing there’s some kind of strange way your particular distribution handles the web-based functions of the game, so it probably won’t be able to work.

Other steam games worked without any issues though… so the only way to make it work would be physically sharing the save files it seems.

Saves exported to the cloud from linux client all show up as “Successful” but then show up as empty in the import on other clients.

Would love to have this resolved, Ubuntu based OS here.

For now the only workaround or hack that I found is to run Siralim Ultimate through Proton… then cloud sync and window resizing etc works perfectly… only I couldn’t figure out where the linux save files are… so I started a new run when starting with proton and it syncs perfectly with Android also.

Sorry for the delayed response on this. I’ve been looking into the cloud exporting bug and it appears to be an engine bug with GameMaker. I’ve reported it to the GameMaker devs and they’ll hopefully get it fixed soon.

As whitecloud mentioned, running the game via Proton should provide a reliable workaround for now, though I realize that’s not ideal.