So I reached a wall, realm level 23 Deathwalker.

And I start questioning myself, maybe I chose the wrong mage. (Life)
I even have level 30s at this time.

Like wth, I can’t even damage this guy (for certain reasons)

So I thought maybe I should just see what breeding does.

And so I spent all my resource points and bred myself a +22 Phase warrior, which had in my opinion a really crappy trait (mitigates 95% damage of all non-attack, magic sources).

Then I found this spell gem called sudden death, which kills a target and deals 20% of max hp of the target to enemies and it only costs 30%hp to use, I’m like whoa, maybe if I use this with my sword which has Midnight feast on it, I would be OP as heck, insta kill + free turn.

At this point I didn’t even have a death monster which could use the ability, so I summoned a Pit worm.

And I go into battle hoping for the best, but alas, Sudden Death is a spell I can only cast on an ally… therefore I can’t use Midnight Feast with it. Buh Bow

But then I also had this pair of gloves which has the trait Necronomicon on it, which allows 2 more casts of a death spell after you cast it, and I also have this spell Dark Ritual.

My dark ritual spell, it kills an ally, and gives 50% of atk, int and def to the caster.
It costs 27%hp to use… and it also casts on another target.

I cast it and it kills 2 of my allies.

And I get stat buffs from both of the aliies I killed… 3 TIMES because Necronomicon casts the spell an additional 2 times on the same target(s).

And now my Pit worm is insanely buffed and deals passively like 80-100 damage with Live to Labor at the start of every enemy’s turn.
And Live to Labor lets me attack Deathwalker… so I’m like I gotta try this out.

So I go to realm level 23 to fight Deathwalker with my level 11 pit worm, my level 12 (+22) Phase Warrior and 2 other randoms that do nothing.
And I get owned… because my Pit Worm gets killed because he’s too slow and on the bottom of the Action Queue.
So I put a lot of Speed Enchantments on his artifact so he can act first.

Then I think to myself, is it possible that since my Dark Ritual can hit a second target, my Pit Worm could kill itself with it’s own ability?
…

The answer is YES, I find out in the next 5 fights that my Pit Worm kills itself because the second target came up as itself. But I still relented on taking down Deathwalker.

Finally, my Pit Worm didn’t kill itself and buffed itself through the roof with Dark Ritual + Necronomicon, but for some reason my Live to Labor damage was only doing like 2-3 damage, I’m like wth. Although my Pit worm was essentially invulnerable throughout the whole fight due to how much defense it buffed itself with.

So I start picking off all the add ons and start killing them 1 by 1 with normal attack, but I’m thinking to myself, after the add ons are dead this is going to take a hell of a long time to kill Deathwalker if Live to Labor is only doing 2-3 damage.

And then I kill this one monster on his team… and Live to Labor is now doing like 70-80 Damage… guess what it was.

Yeah there was a Phase Warrior on the opponents team, with the trait that I thought was terrible. It was mitigating 95% of the damage that my Live to Labor does

I eventually kill Deathwalker, with a team around level 12 at most :D, my team got to level 20 after that fight!

I am now in my 70s and so far my Bread winner combo is my Pit Worm Tunneler with Necronomicon casting Sudden Death on my Swampdweller.

The Swampdweller has 200% extra maximum hp at the start of the fight, so I have loaded him up with an armor artifact with hp buffs and I managed to find a Ruby Attunement trait, which gives all my creatures an extra 100%hp. So now my Swampdweller has like 10k hp.

When I cast Sudden Death on it, it deals about 2k hp damage to the enemies, 3 times due to Necronomicon.

The only downside is that it’s not a flat 2k damage as I think it just get’s treated as Death Elemental damage at 2k rating, but gets mitigated by the enemies Death defense rating, which really sucks if an enemy is holding a Death Shield.

I’ve also managed to get Hell Blast, which lets a monster cast a vs all enemy spell for free by using the provoke command. I’ve put it on my Stardust Amaranth and made sure the only AOE Spell it has is Blistering Radiance, which deals large damage and inflicts scorn on all enemies. Combo that together with a rune which makes all scorned enemies have no traits, and I’ve almost locked down the enemies.

I need to be able to silence all… where do I get stifle? 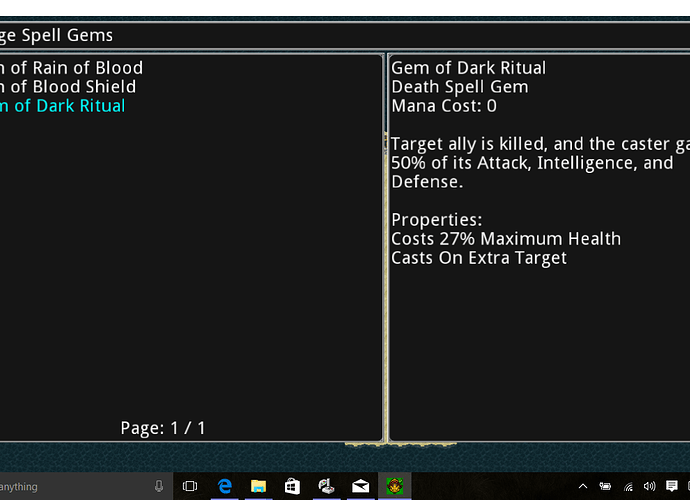