So in 0.1.22, there appears to be a bug with Petra & Aes’ initial 50% speed gain not triggering Hearty Appetite.
The 20% at start of turn will trigger it and both will trigger Beast Within’s attack boost (which in turn triggers 20% of that converting to health) so I’m assuming it’s a bug. 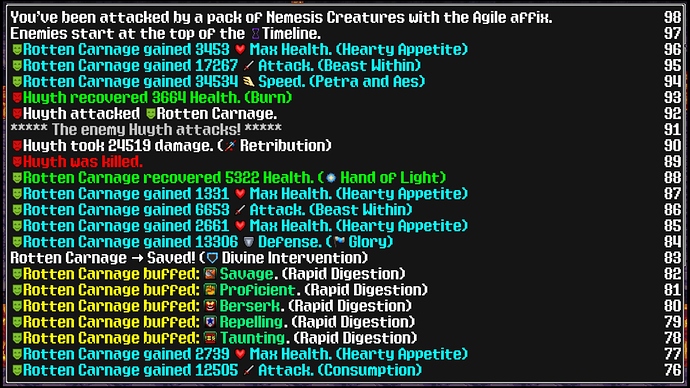 I have also noticed that when anyone has the trait that attacks an enemy when they gain stats, Petra & Aes’ first boost seems to trigger that way too many times (don’t have a screenshot handy, but usually it ends up being nearly 20 lines of “[enemy creature] has already attacked too many times this turn”.
This might partially be because of using Paladin, so the first attack triggers a counterattack + stat gains, triggering a counter-counterattack, and that continuing to repeat, but it always just shows a huge chunk of the enemy attacking in the log, not so much my creature gaining stats. Ultimately with the Paladin, my creature ends up dying from all those attacks, and the battle ends because he deals over 1M damage with the “Execution Sentence” or whatever it was called, usually.

Thanks, should have this fixed for the next patch!