I don’t know if this qualifies as a bug per se, but it’s an imbalance that’s game-breaking if you’re trying to reach a certain goal. I have exactly one creature left to get in my Breeding Catalog, and that’s the Plague Soothsayer. The only recipe requires a Plague Surgeon core, which is effectively unobtainable for me (500+ hours, lvl 7000+). All of the other recipes that require a “unique” creature have an alternate, non-unique recipe… could you please add a recipe for those of us who want to complete breeding 100%?

On a similar note, from what I understand (limited to a single line in one of Gay Monster Dad’s achievement guide), the Plague Surgeon can only be gotten through drops, and only drops early in the game, if at all. I don’t have a Plague Surgeon. Given that they’re only obtainable early on, it sounds like I’ll never get one. Any chance you could maybe make them obtainable for later-stage players?

Plague Surgeons now drop at all stages of game and can be obtained both in loot and as creature drops as well as wild egg drops and Tartarith realm cores. Currently, I have 11 plague surgeon cores and have used about 10 other cores for knowledge farming etc. Like many drops in this game, RNG is involved. Note that plague soothsayer is a normal creature and can be extracted from - so there is no need to breed it if you have high enough knowledge of it. You can also get plague soothsayer from eggs, creature drops, and Tartarith realm cores if your knowledge of it isn’t high enough yet. There are even Plague Doctor sigils that will spawn a whole realm of just plague doctors, which can help you to get Plague Doctor and Soothsayer cores.

Creatures beyond Tier 2 cannot be extracted from unless you’ve already bred one (as denoted in knowledge, “You can extract this creature’s cores after you obtain this creature” in the “knowledge bonuses” for many creatures). Therefore, simply getting enough knowledge won’t suffice for a Soothsayer.

Also, I’m assuming you got a Plague Surgeon early on if you have that many cores. Not an option for me, since it never unlocked. Less than 4% of people have gotten one at all (a fifth of people who have completed story mode), so it’s clearly not as common as you suggest.

Eggs and Tartarith cores aren’t exactly viable alternatives. By my calculation, there’s just over 600 creatures that could be rolled. That’s just crazy-talk. I’d be better off rolling for new Godspawn.

Though it occurs to me that I could use a trap spell if I felt like trolling absurdly low-level realms for a Soothsayer. I’m still out a Surgeon, though.

You don’t need to have bred it to be able to extract it - just need to have had it. Like I said, there are now creature drops of their cores without having them S-ranked. The old S-rank effect was replaced and it is now given by default. So you can get plague surgeon and soothsayer cores from creature drops. Creature drops are the special drops from killing that creature - they have a chance to drop their core. Since special creatures show up more often in higher realm depths, you will be more likely to get plague surgeon cores via this drop the higher your realm level. I’m also not sure where the plague surgeon only dropping in low levels came from since I’ve found them in loot in high realm levels as well. Also, plague doctors and other special creatures show up in realms the deeper you go regardless of whether or not you have summoned it before.

Singular extraction is another endgame method to get cores that cannot normally be extracted, which I didn’t mention before. In late endgame when you get vegetable dumpling and high Yseros talisman level, this becomes a viable method to get normally unextractable core (last Plague Doctor Sigil I did gave 6 Singular Plague Surgeon cores for instance).

I’d recommend trying the Plague Doctor Race sigils. Trap spell gems really don’t have much use in endgame - so this may be the last time you would actually have a use for them. Pair trap spellgem farming with the plague doctor sigil (guaranteed to have at least 10 plague doctor mobs in realm = at least 60 plague doctor enemies). Then you only need to do one realm using that sigil at a low enough level to be able to use the trap spellgem on Plague Soothsayer and you might also get a special drop plague surgeon core. Either way, they are both definitely obtainable in endgame. Hope that helps!

500 hours, and I have not encountered a single Plague Surgeon. Not once. Ever. It’s one of those where you need to summon it before it shows up in the field. They can’t drop their core if they don’t appear in the first place.

Just out of curiosity, how many hours in are you that you’ve got a vegetable dumpling? I just kinda assumed that the creature was just some sort of bad joke. You treat it like it’s as obtainable as any other endgame content.

Hi there, hours are not as important as realm level. I’m around itherian realm level 3300. I think somewhere around realm level 1000 and above all special creatures are unlocked in mobs whether you have summoned them or not. Note that they can only be found in special same race mobs, which usually only appear once per realm - so they are still pretty rare to encounter. Like I said, try the Plague Doctor Race sigils ideally with an additional Same Race property (allows special creatures to spawn in 10 mobs of realm instead of just one) to have the best chances to get plague surgeon cores. I’ve attached an example sigil. What is the max realm level you are currently at? Also, when you say you have never seen plague surgeon before, do you mean it doesn’t even show up as an entry in your knowledge section of game?

Special creatures do not appear prior to their summoning. No Priest of Radiance, or Harpy Screamer, or Plague Surgeons for me (well, not yet). Only standard, breedable creatures show up in normal mobs, and an extended set (Emblem/Arena/Tavern) creatures in Nemesis mobs… but in all cases, you have to have unlocked them first. I’m only at a mere Itherian level 300-something (similar standard realms), but I’m guessing it’s not going to change regardless of what level I’m on. 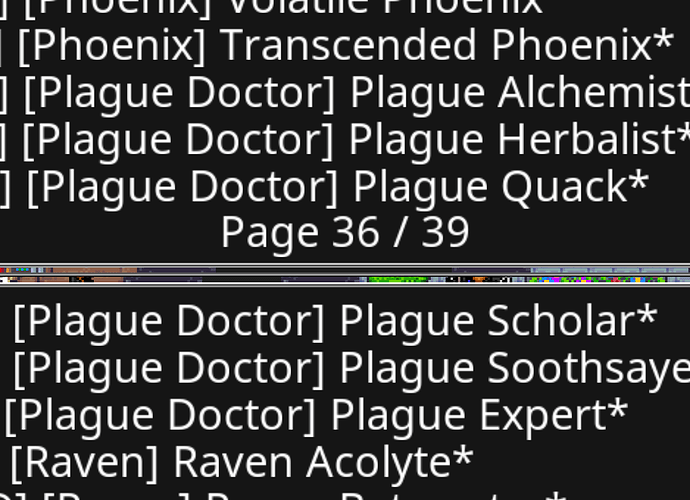 Just asked this question on Discord chat. Umaro and another player confirmed that Plague Surgeon cores do drop at all realm levels in Nemesis mob loot. You can boost the chance to find Nemesis mobs using the Ancient Cuirass Talisman and Extra Nemesis Creatures sigils.

Nemesis mobs have the same creatures as regular mobs - they just give 3x XP/resources and give loot after defeating them. It is in this Nemesis loot where Plague Surgeon cores can be found. Nemesis mobs also have special affixes which can be seen above the mob on the map and in the bottom left of battle screen: Agile, Blessed, Blinking, Brutal, Champion, Feedback, Hearty, Hex, Horde, Macabre, Misery, Obtuse, Plague, Protected, Pulse, Resistant, Thorns, Undying, Vengeance, Genius, Greedy, and Knowledgeable.

Hope you have better luck finding the Plague Surgeon cores!