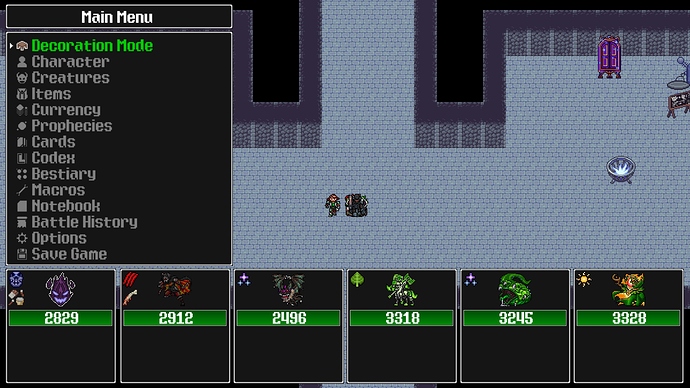 If you want to share your ingenious team, or cool concept of a team, this is the thread to do it!

I will start with my own current team:

Laughing Wisp:
Traits - Ethereal & Shadow Bulwark & Damage Control (though I hope to get the Thunder Storm trait where you are immune to spell damage someday, then this creature is truly invincible!)

Laughing Wisp is used as my provoker, being immune to most damage thanks to Ethereal and Shadow Bulwark, it ignores attacks and all damage that isn’t spell or attack related, so the only way to damage this creature is via spells, and even then it always has Repelling, so there’s a 35% chance I won’t get damaged by spells anyway.

Nix Informer:
Traits - Supersonic & Rampart & Winter Has Come (for lack of a better artifact trait, it’s extra insurance for the beginning of the battle)

Nix Informer makes sure that enemies can’t cast spells under normal circumstances, thus making it impossible for them to damage my team at all thanks to Laughing Wisp, provided it has provoked. This is where Nix Informer’s Rampart traits comes into play, increasing Laughing Wisp’s Speed stat so it often starts at the top of the Timeline. Weak with attacks, so it is mostly used as a support creature.

Mutated Pulse Bat is adjacent to Nix Informer, thus gaining its Speed boost as well, and given it has two traits that rely on its Speed stat, it’s a good choice for an offensive creature! Its main two damaging AoE spells make use of its amazing Speed stat to almost always instakill the entire enemy team, even up to the point where enemies are 80 levels above me! Especially since it is now more reliable since one of the patches, it works perfectly now!

Dawn Crusader is absolutely crucial to this team because it extends my own buffs and the debuffs of the enemies, basically rendering them Silenced throughout the entire battle, preventing them from ever hurting me during a normal battle! Relying on Attack stat instead of Speed, in conjunction with Wild Stabs, it can attack six time in one turn, triggering Mutated Pulse Bat’s trait a lot of times. Add in my Hell Knight specialization, and it can attack at least 10 times per turn, up to 12 times! It also has Earth Enchantment to give my Laughing Wisp Taunting so it permanently provokes. In a pinch, it can also serve as a secondary provoker. Quite the crucial creature!

Spitting Pit Worm lowers the Defense of the enemies, which is quite a good thing because this team can easily handle creatures more than 100 levels above them, but hitting them might prove to be difficult at times. Add in the Drained trait to also damage them, and it provides synergy with Mutated Pulse Bat’s Momentum trait, sometimes dealing up to 25% damage per creature because my bat’s Speed is insane! This creature also has several Sorcery support spells it can use in a pinch, but it’s mostly used for attacks with its high Attack stat.

This creature is there to increase my Attack and Speed every turn, while also providing many support options with its Life Spell Gems, and even boasting a decent Attack stat that keeps increasing thanks to Insatiable. And because it increase the other creature’s Attack stats, it kinda snowballs the longer the battle goes on, which is what its purpose is… An insurance policy in case battles take a long time, so that I will eventually win with all the stat decreasing and stat increasing combined. It’s also a nice third attacker.

With a near invincible provoker, I can take on anything that aren’t spells (yet), but Nix Informer takes away that weakness most of the time, while I either instakill everything with my Mutated Pulse Bat, or I will eventually snowball my stats until I am POWER! And thanks to Dawn Crusader, enemy debuffs and my buffs never run out, so the perk that casts Firestorm to burn all enemies is incredibly useful, even if the direct damage is practically 0.

What do you think about my team? What is your team about?