Spells granted by traits not selectable in macros

I’m not sure if this is necessarily a bug or if it can even be fixed with the way the system is currently set up, but when building a team around a spell granted by a trait it would help tremendously to be able to include them in macros.

You can include Major Healing in your macros. Do you mean that it isn’t casting the spell when you use the “Macro” command? Can you tell me the full macro line?

I think the issue is that I don’t have the spell gem, if I had it I’m sure it would appear on the list, but because I’m getting the spell from a trait the system isn’t adding it to my macro’s “cast…” options.

for example if I try this macro set-up the spell isn’t on the list:
If this creature; has < 30 mana; cast…; cast Major Healing

I’ve tried a bunch of other macro commands, I think the macro “cast…” only lists spell gems I own, so I can’t add Major Healing to my macros despite having the ability to cast it.

I just tested it with the Imp Hexer’s Trait, Earthen Attunement, which allows your creatures to cast Shellbust for 0 mana and I’m running into the same issue. Again, I don’t have the gem and again, I’m unable to cast the spell with a macro.

Adding a solution to this in tomorrow’s patch, thanks!

Just tested it out, works perfectly, keep up the good work!

There seems to still be a bug in trying to macro the Major Healing spell granted by the trait. Only difference is I’m being granted this spell via Matra trait granted by an artifact item. 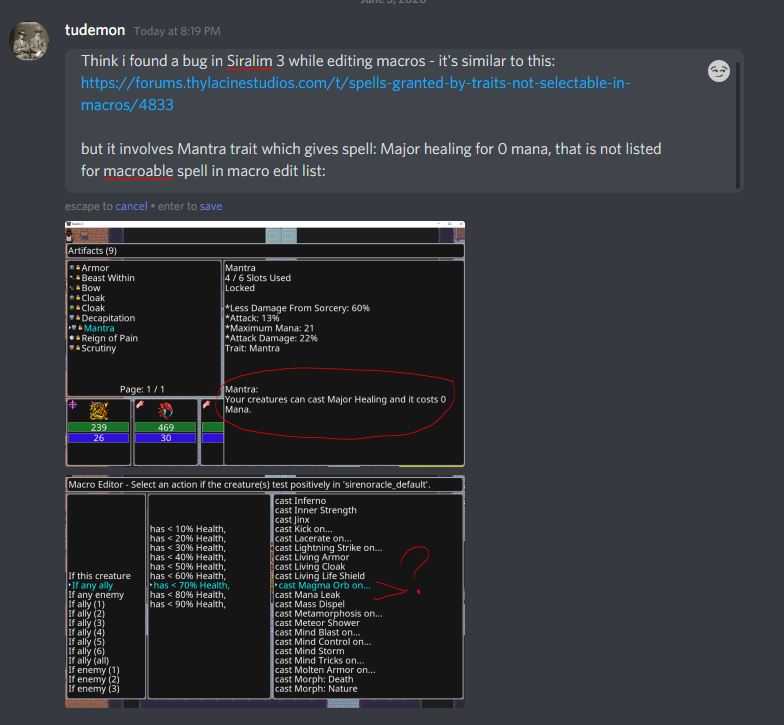 I am having the same bug. Spells granted by traits dont seem to show up in the macros